Does anyone share my opinion that watching commercials during the Super Bowl over the past couple of years is losing its hype?  Thank goodness the game was so good, because many commercials left little to be desired.  Walking away, I think I saw more TV and movie commercials, followed by (of course) car commercials than any other year.  Are these slots being filled by TV shows because other companies do not see the value for such an expensive time slot when there are so many other alternative means of reaching their target consumer?This year we saw a few political themes focusing on:

and made in America (WeatherTech).  A few did not show their product but wanted to send a message or wanted to reflect what they want their brand to stand for such as Audi and Hyundai. Others wanted to draw attention with celebrity endorsements Justin Bieber, Justin Timberlake, Christopher Walken, Morgan Freedman and Lebron James, to name a few. And then there was the use of everyday people in the Febreze Ad with Half Time Bathroom Break.

This year creators did step up with being innovative, taking a risk and thinking out of the box.  There was Snickers filming a live commercial that I thought was cool, sharing the score of the game for a reason to believe, but overall I think the commercial was flat.  Hyundai had a very touching ad that brought soldiers from afar and brought them together with their family during the game using technology.  This commercial was filmed during the first quarter, edited and approved by Hyundai and others to appear before the half-time show.  And yes, cheers to Lady Gaga for a great half-time show!

Also, cheers to creators of the ad for Genius, having Albert Einstein playing Lady Gaga’s “Bad Romance” on the violin right after her performance.

Just like everyone else, I always look to be entertained during the super bowl either by the game, half time or the commercials and I would like to say thank you to the few that made me laugh (T-Mobile, Kia, Mr. Clean) or made me feel emotional (Coca Cola, Michelin, Ford).  I hope Super bowl 2018 will push the limits like 2017 with respect to technology, humor and empathy.[/vc_column_text][/vc_column][/vc_row] 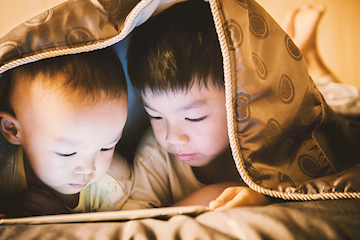 Watch Out! Thanks to Digital Media, Kids Are Growing Up Faster... Our very own Katie Wilson gives her take on this year’s...