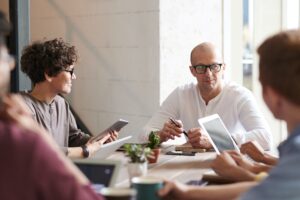 Picture this:  It’s 7:00pm on a Wednesday night. I am sitting in the room with 8 consumers huddled around a table. It’s the dead of winter, pitch black outside, and all of the consumers are looking at their watches. No one wants to be there and it definitely shows in their conversation. They respond with one word answers and have the same amount of energy of as a 90 year old man doing jumping jacks. After what seems to be the slowest 60 minutes imaginable, the focus group lets out. Now, it’s time for the client debrief. All of my clients scurry into the debrief room telling me to make it quick as they have to… “fill in the blank.” I rush through the day’s learnings, and then a sigh of relief fills the room as we adjourn. No deeper conversations about their business needs, no bonding over the insights process, and no client dinner. Nothing. Why? Because these groups were scheduled at night…

The Challenge of After Hours Focus Groups

The scenario described above was my life when I first began in the moderator business some 15+ years ago. However, those of you who know me know that I and Insights in Marketing constantly challenge industry norms to make things better. So, shortly after I began my career, I started my quest to answer the million dollar question: Are night time groups really better than daytime groups? Facilities insist they can’t get quality recruits at night, clients often felt most comfortable scheduling at night because it was an industry norm, but do nighttime groups really generate better recruits and insight?

Consumer Engagement Rises with The Sun

My gut was telling me that nighttime groups were not as effective as daytime groups. So even though I was at the start of my career, I did the unthinkable and switched to groups during the day. What I found was astonishing!

IIM’s early intuition about daytime groups has caught on. Focus groups during the day are now much more common and easier to recruit for. IIM is excited to have played a key role in such a positive industry change! We look forward to continuing to be catalysts for more positive changes to come… Tapping into consumer insights at five stages of concept and product...

How Did Consumers Shop for Holiday Gifts?  We previously shared our... Whether you’re in the marketing research arena or another people-focused field,... Communication is at the core of marketing.  In order for marketing...